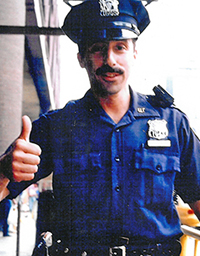 
Police Officer Cortazzo responded to the World Trade Center in the aftermath of the terrorist attack on September 11, 2001 and actively participated in rescue and recovery operations on that day and for several months after. In 2005, Officer Cortazzo was diagnosed with a blood cancer and died on March 14, 2009.