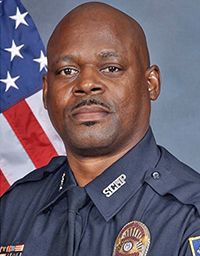 
Sergeant Ansari was shot and killed while attempting to apprehend a robbery suspect. Sergeant Ansari and another officer arrived at the scene to investigate a robbery complaint. The suspect exited his vehicle and fired shots at both officers. The suspect fled and fired shots at responding officers and was fatally wounded. The second officer wounded in the incident sustained non-life threatening injuries.