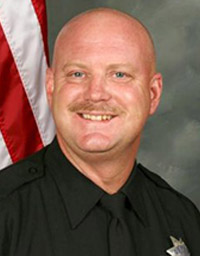 
Deputy Sheriff French was shot and killed outside of a motel during a stolen vehicle investigation. The driver of the stolen vehicle was on probation and registered at the motel. Officers went to the motel room to conduct a probation search and knocked on the room door. A male suspect armed with a rifle opened fire and wounded two officers. The suspect fled the scene from the balcony and encountered Deputy French in the motel parking lot where an exchange of gunfire took place. Deputy French was fatally shot and succumbed to his injuries at the scene. The suspect was wounded and taken into custody.