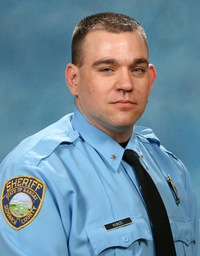 
Deputy Sheriff Kunze was shot while investigating a suspicious person call. Deputy Kunze attempted to arrest the suspect and a struggle ensued. During the struggle, there was an exchange of gunfire and both Deputy Kunze and the suspect were shot. Deputy Kunze was transported to the hospital where he later succumbed to his gunshot wound. The suspect died at the scene.