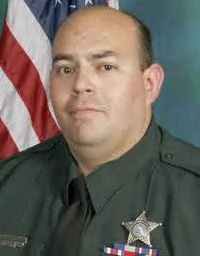 
Deputy Sheriff Diana performed CPR on an ill infant on February 26, 2006. The child died as a result of the illness. Deputy Diana fell ill shortly after the exposure. On March 24, 2006 Deputy Diana was placed in ICU for a severe respiratory infection which affected his heart. Deputy Diana eventually returned to work but was under continuous medical care concerning his heart until his death on March 12, 2011.